I wrote this poem some time ago after seeing the devastation the west inflicted on innocent people. I have reposted it after the results of the Chilcot enquiry. When we allow ourselves to be ruled by psychopaths, it is the innocent who suffer. 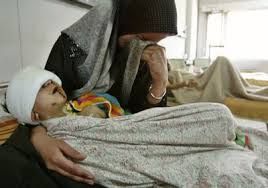 A solitary star hangs in a silent sky
and speaks to the heart
of a place far removed
from the present chaos and agony
of broken lives, broken bones
and ruined buildings.

Dead air, pierced by sobs, moans
and muffled prayers
Shell-shocked minds with empty arms
retreat behind blank eyes
and fall into a chasm
of inner grief.

The Horned Viper uncoils
in slow menace
under the dawn sky
and side-winds down
to the city.

Hell is all around.

The Crescent Moon,
is weeping for her children.
And here, half across the world
on the cusp of this new day,
in sleepless solidarity
a mother cries along.

By "the West", you really mean America and Britain. Most of the rest of the West (Canada, New Zealand, France, Germany, Norway, Sweden, Finland, Switzerland, Austria, Belgium, Greece) were opposed to this unbelievably destructive, irresponsible, permanently-damaging act of folly, and now, in spite of that, most of those countries are going to suffer massively from the consequences of that war. It has sown the seeds of a clash of civilisations, of World War Three. Although maybe that was exactly the idea.

Tony Blair should be executed for crimes against the entire human race.

But it's not just him. We also had MI5 ignoring the evidence that there were no weapons of mass destruction in Iraq, and whoever it was that bumped off Doctor Kelly for saying the same.

This was in Britain, astonishingly, and not the Soviet Union or North Korea...

Author's Reply:
The images and films I saw of young children killed and maimed . Those alive screaming for their distraught mothers and fathers affected me deeply. That DEMON Madeleine Albright, when informed half a MILLION children had died..responded that it was considered worth it!
What can we say about people like that? They are the psychopathic sociopaths who are now in control. Blair was a spineless puppy to the NWO. He has sold his soul. Like you I want to see him swing but come what may, he will meet judgement some day.

I really do not think people understand just how near oblivion we all are now. Putin has become exasperated with all the provocation and has warned in no uncertain terms that we are heading for NUCLEAR WAR unless we take control. He showed up Obama’s pathetic attempt to show the world he was trying to combat ISIS. It is that bunch of bastards who have funded and trained Isis.
I despair for the future.
No wonder the Bible tells us. “The people perish for the lack of knowledge”

We are now entering the last ditch saloon and even as I write nuclear warheads are being primed.
Thanks as ever for commenting and sharing my intense feelings of revulsion.
Our hearts are in the right place!
Alison x
stormwolf on 08-07-2016
Crescent Moon
Rest in peace Dr Kelly and Robin Cook.

So amazing they both conveniently died very suddenly.

'A later memorial service at St Margaret's Church, Westminster, on 5 December 2005, included a reading by Tony Blair and tributes by Gordon Brown and Madeleine Albright.'


Anybody joining any dots yet?

Author's Reply:
Supratik on 09-07-2016
Crescent Moon
Deeply touched. The last stanza is worth a thousand read. Poems like these should be read by many. Supratik

Author's Reply:
There are many evils in today's world but children come in unblemished and precious. They do not deserve to suffer like this. Pain and loss knows no barriers of colour or creed,
These acts of war are a stain on the collective consciousness of humanity.
Thanks as ever for reading and your most generous comment..
Alison xcooky on 09-07-2016
Crescent Moon
A very classy poem which captures the world today. I guess if you write long enough we are all capable of such superb work. This is certainly first class.

Author's Reply:
Thank you very much Mike. I think when the emotions are engaged it translates onto the page.
I will have to write a happy poem soon.
haha

Alison xxBozzz on 09-07-2016
Crescent Moon
Tne tragedy you write of in your beautiful but sad poem I s was inspired by the continuing madness of the Christian religion. In the end, such men always s reach for the gun. I am so impressed by your skill – as ever
Love stays, David


Author's Reply:
So many Christians today are only paying lip service. Jesus would be appalled.
Do not judge the actions of such slimey Catholics as Blair with those who hold love dear .

Author's Reply:
NO...Luciferians rule the world. It even says so in the bible. Jesus knew it.

It depends how far up the pyramid people are prepared to go.

Alison xsweetwater on 10-07-2016
Crescent Moon
I can only add my comments to those above, there is nothing more I can find to say that hasnt already been expressed. There is fast becoming far too much grief and horror to bare, or to even take in anymore. A very fine, if heartbreaking poem
Alison. Sue xx

Author's Reply:
Hi Sue,
Yes, there is so much suffering but from hereon in I am going to try to change my tune and concentrate on the light.
There is so much beauty in the world and that is why it upsets me so much to see the ugliness and violence.
However, if humanity can collectively send out a different signal? circumstances can change almost miraculously. I have to keep thinking that.
Alison x Kipper on 12-07-2016
Crescent Moon
Dear Alison,
This is without doubt excellent and deeply moving writing, clearly acknowledged by your correspondents. Much of their comments, and your replies also have my support even ithough I might have expressed them in less forthrightly terms.
However your reference to "those slimy Catholics' was hurtful to me and perhaps others too, for it implied that Catholics are less capable of feeling the revulsion you speak of. I am a Catholic and I assure you that in this you are mistaken.
It is nevertheless a very well written and moving poem.
Michael

Author's Reply:
Hi Micheal
I fear you have misunderstood me and my reference here. I was referring to Tony Blair as slimey and it's my opinion his conversion to Catholism was not genuine...just my opinion. Had he really had a spiritual conversion he would not have maintained he would do the same all over again, namely sending hundreds of our young service people to fight and be killed or maimed and resulting in the deaths of millions of innocent people.
I was actually married for 20 years to a catholic and he's the father of my three children so I was hardly tarring everyone with the same brush. In fact one of the most influential women and mentors to me on my long spiritual walk was a catholic nun.
Sorry you have taken this personally.
I was actually quite shocked that you did.
Alison
stormwolf's NEW UKA Writing | stormwolf's UKArchive Writing
Scroll Up